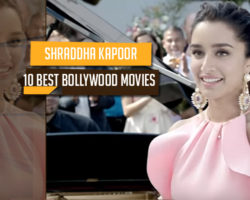 The Mumbai born girl Shraddha Kapoor daughter of Shakti Kapoor with great acting in her genes with her overwhelming with her tremendous performance and one of the finest actors of Bollywood who started her career in 2010 with Teen Patti and followed with leading role in the teen drama movie which is titled as Luv ka The End in 2011 and became an ashiqui 2 fame and she was recognized for her role in commercially success movie which is a romantic drama Ashqiui 2 2013 by her brilliant and sparkling performance.

Shraddha Kapoor has many movies in her list with many hits in her career here we are listing the top 10 best bollywood movies of shraddha kapoor hits. Shraddha kapoor having a huge fan following for her acting performance and as well as her singing performance for her film songs and she also participates in stage shows and concerts beside this and wins the hearts of her fans. Shraddha kappor is listed as the one of the most attractive and popular celebrity in India. She has a commericla success as well.

Here is the list of 10 Best Bollywood Movies of Shraddha Kapoor Hiit Movies:

1: Aashiqui 2 : Shraddha Kapoor playing a role of Arohi and she was recognized as Arohi in film industry for her tremendous acting with her cuteness in Aashiqui 2 movie as a playback singer.

2: ABCD – Any Body Can Dance 2: Shraddha Kapoor as Vinnie sizzling with her terrific dance performance in ABCD 2.

3: Half Girlfriend : Shradda kapoor as Riya Somani in a relationship status of Half Girlfriend a story of novel which is written by Chetan Bhagat and also a playback singer for a song “Phir Bhi tumko chahungi ” song.

4: Ek Villain: Shraddha Kapoor as Aisha Verma a heartful girl with a separate set of dreams to full fill in her life with her cuteness stole everyone heart in Ek villain and also playback singer for a song Galliyan.

5: Baaghi (2016): Shraddha Kapoor as Sia which is lovestory with action twists and even shraddha kapoor for the first time performed action scenes in Baaghi with tiger shroff.

6: Haider: Shraddha kapoor as Arshiya which is a novel of Shakespeare sharing screen with Shahid Kappor

7: Rock On 2 (2016): Shraddha Kapoor as Jiah Sharma which is based on music love interest and also shraddha kapoor sung 4 songs in rock on 2 “Tera mera dil”, Rock on Revisited, Udja Re and who jahan.

8: Ok Jaanu : Shraddha kapoor as Tara which is movie of relationship status which is remake of tamil movie.

Shraddha Kapoor with her best bollywood movies till date is moving ahead along with good success and proving herself as one of the best actor of present time and grabbing all lead roles with big directors and sharing her screen with big bollywood stars and now she is a bollywood star performing biopic’s with her upcoming which is ready to release this September Haseena Parkar playing a role of Haseena sister of lndia’s most wanted.

In her next Shraddha kapoor is playing another biopic role of Saina Nehwal which is about to go on sets and performing shooting in progress and beside that she recently selected for the lead role in Prabhas movie Saaho the south superstar the bahubali actor Prabhas shraddha kapoor upcoming movie and convincingly these three movies Haseena Parkar, Sania Nehwal biopic and Saaho movie will be best bollywood movies of shraddha Kapoor in coming years.