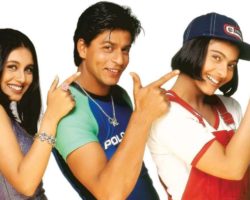 Its 18 years of kuch kuch hota hai and unforgettable Rahul and Anjali ka jagda in the film
Kuch kuch hota hai #KKHH is an Indian Hindi coming-of-age romantic comedy drama film, released in India and the United Kingdom on 16 October 1998. It was written and directed by Karan Johar, and starred the popular on-screen pair of Shah Rukh Khan and Kajol in their fourth film together. Rani Mukerji featured in a supporting role, while Salman Khan had an extended guest appearance.

SRK playing a role of Rahul and Kajol played a role of Anjali followed by Rani as Tina(Daughter of Anupam kher). All the roles played in this movie are unforgettable.

Kuch kuch hota hai was Karan Johar’s directorial debut. One of his goals for the film was to set a new level for style in Hindi cinema.
Here is the video :

#18YearsOfKuchKuchHotaHai …. the film that will always remain close to my heart. Shah Rukh Khan and Aditya Chopra made my cinema dream come true!

This film broke many records in bollywood and oversears.
The film was extremely successful in India and abroad, becoming the highest-grossing Indian film of the year and the third highest-grossing Indian film ever behind Hum Aapke Hain Koun..! and Dilwale Dulhania Le Jayenge. The film was also the first Bollywood film to enter the UK cinema top ten.