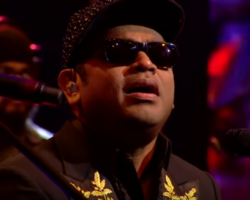 Recently AR Rahman’s legendary song Humma Humma was remixed and recreated by Baadshah which is a huge hit in the movie Ok Jaanu and with in no time but now here comes another legendary song of AR Rahman which gives the instant hit by the same Ar Rahman’s brand with a new vesion of Urvasi Urvasi.

The AR.Rahman who is an Oscar winner has just recreated one of his old track from the 1994 film Kadhalan for Mtv Unplugged. This series of Mtv Unplugged series shows a musical artists performing to acoustic instruments and this song.

As the Song starts it is very clear that the music of this song and the voice of AR.Rahman is like hearing them with from lot of years with in the audience by AR.Rahamn is like listening a song in a heaven. This Mtv Unplugged version has everything in the song voice of the Oscar winner and the music was outstanding here it is why he is called AR.Rahman the musical soul and why he is famous of his music and songs and it is very easy for some one to adapt to this music coz this has everything it got to hear to enjoy and for humming and for dancing it haven’t left anything behind.

And not the least the song lyrics, like previous, inspire everyone to adopt a ‘take it easy policy’ but with consequence to current affairs Donald Trump’s presidency, for one, and even the currency ban. What’s more interesting is that the lyrics for the track have been crowd-sourced from social media.