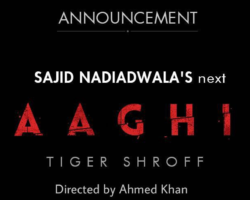 Even before the release of Baaghi 2 movie which is releasing on march 30 2018 makers announced Baaghi 3 movie next venture of Tiger Shroff Baaghi 3 franchise in series which took twitter to storm and surprised everyone.

Baaghi 3 which will be directed by Ahmed Khan and tiger Shroff as the main lead and Baaghi 2 will be hitting near by cinemas soon and makers have announced their third installment series of Baaghi 3 which shows that how confident Ahmed Khan directed is with Baaghi 2 movie./p>

Baaghi franchise started Baaghi series in 2016 with Shraddha Kapoor as the female lead while the main lead by Tiger Shroff and received lot of positive response and appreciation for the performance of tiger Shroff and Shraddha Kapoor and made a decent box of collection of Baaghi movie making a total of 76.34 crores in Indian box office.

Tiger Shroff Baaghi 2 Disha as the main female lead for the first time in Baaghi 2 movie.

Tiger shroff has a dozen of movies projects in his pocket including Adhoora movie, Student of the year 2, Rambo movie and many more.

Tiger Shroff with his upcoming movie filled with plenty of action packed performance and tiger Shroff fill physic for Baaghi 2 and Rambo and his upcoming movies specially playing alongside with Hrithik Roshan will be amazing seeing both of them performing together on screen.

Release date of tiger Shroff next movie Baaghi 3 series is yet to be announced.

Star cast and crew of Baaghi 3 as the main lead will be played by Tiger Shroff and more details of star cast is yet to be casted for this movie.