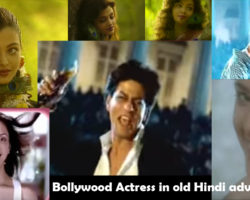 Bollywood Actress Aishwarya rai in one of her firs tv commercials of big brands done by her and she is seen feautured with the another star sonali bandre. A young and gorgeous Aishwarya rai will also been seen in a different hair style, after hearing about sonali bandre every one reminds of her famous ad of washing powder nirma ad.

Aishwarya rai the radha ad was pictured very well at that times covering all the beauty of actors in one single ad in radha garments, and is it ia garments ad it was taken in a very traditional way which makes the miss india aishwarya rai look more beautiful as along side sonali bandre also.

Aishwarya rai is also well known to the indian audiences much before she won the miss india crown.

The fevicol ad of katrina kaif sitting in a train as she does nothing at start in this advertisement tv commercial, she sits in the train and the opposite travelling person who sits in from of her who is newly married goes crazy after seeing her beauty and unable to catch her as fevicol plays a role there, he sticks to fevicol box which is kept a side by.

In this commercial katrina shows her beauty with her sizzling moves and her gorgeous looks steals the show in the ad fevicol becomes more famous by her added beauty.

Deepika Padukone in close up Ad:

Deepika padukone the south indin beauty used to be a familiar face on ramps as she walks in the most of top fashions circle.

Deepika padukone was seen in close up ads with her young beauty with beautiful smile which makes every one crazy with dimples her first debut movie on shanti om starring opposite Shahrukh khan which is directed by Farah khan she steals the shows in her double role in her debut movie opposite shah rukh khan.

Pepsi commercial one of the most famous and still remembered ad of pepsi, which is seen with the star cast of Kuch kuch hota hai movie shahrukh khan, rani mukharjee and Kajol.

Shahid kapoor playing a lead role in the ad he says yeh dil mange more, the young shahid kapoor which is hard to believe the youth in the ad is shahid kapoor as he got much fame with this pepsi ad. Shahrukh khan at his best steals the show as he shows his presence on screen whether it is a television commercial or a movie, his presence makes alot of difference and he steals the show at his best which is well known and suits him the best as he is the one of the top bollywood actor across the world with much overseas rating fans of him.

Preity zinta with her sexy and sizzling ad of lux with her beauty, smile, and her dance moves also known as the liril girl at times with dimple beauty on her smiley face steals the ad as she moves and dances to the la ira ira ira liril music dance movies and grabbed all the attention of audiences and hearts, and she is popularized for the ad moves to the bollywood and she is known as one of the best actress with her beauty and acting skills.