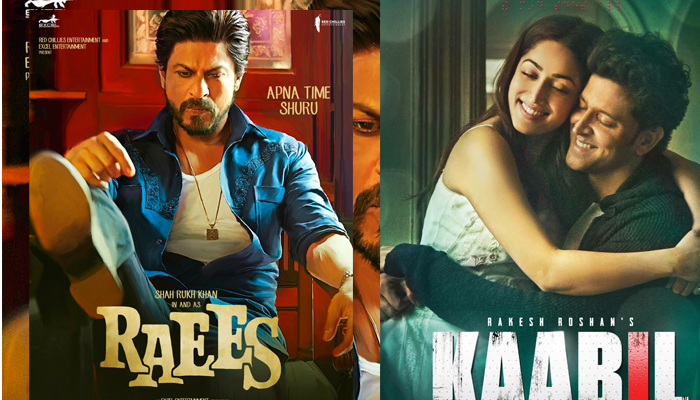 Clash of Raees and Kaabil

As the new year begins here comes the clash of the two most actors films and both their movies are scheduled to release on same date.

As the new year begins and we enter into the year 2017 there are two big movie releases in the Bollywood this January. One is Hrithik Roshan’s Kaabil and the other is Shah rukh khan’s Raees.
These two films are all set to clash on this January 25th 2017. The Both actors are looking more promising in playing their role in their movies.

The both the movies are most awaited movies in Bollywood and the expectations are also too high for the both movies.

Hrithik Roshan and Yami Gautham is playing a blind role in the movie and never seen role’s till now played by the both lead actors in the movie Hrithik roshan and Yami Gautham and they somehow come close to each other and fall in love and both are seen good on screen chemistry in the trailers of kaabil. Kaabil is an romantic action thriller film and a revenge drama which is directed by Sanjay Gupta and written by Vijay kumar Mishra and produced by Rakesh Roshna under the banner of Filmkraft Productions and music composed by Rajesh Roshan. This film have been received many appreciations from all sides.

Shah rukh khan has already impressed his fans and audience with his punch lines from the movie like “Baniye ka Dimaag Miyan bhai ki Daring” which means “Mind of a businessman & bravery of a Pathan.!”.
And not the least Sunny Leone playing item number in this movie for a legendary song of Laila mai laila and which is much appreciated by all kind of audience.

We have to wait and watch what happens when these both movies Raees and Kaabil clash on the release date. These both films are all set to clash on January 25th 2017 a big date for the Bollywood to see the clash of these both movies.