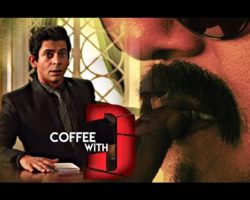 Coffee with D is a hilarious experience where Arnab and his team comprising of Neha, Roy, Rummy and Chussi manage to interview the most dreaded Don. So sit back, but don’t relax because India’s most loved news reporter is going against the world’s most wanted Don.

Lead role is played by Sunil Grover he is well know for his television shows in The Kapil Sharma show playing Several roles the most famous and appreciated roles DR.Mashorr Gulati in The Kapil sharma show besides he also plays role of Gutti and shifts his role as per needs like siddhu also some times which is most watchable imitating sidhu and his shayaris.

Sunil Grover is well know for his acting and comedy. Coming to this movie Coffee with D he played a role of journalist and in trailer he is seen he is forcing to give interview of D company don a most wanted criminal asking for his interview which he sends a message via social media and finally D company accepts his invitation for interviewing and plans him to kill in the interview on national television as shown in trailer.

Sunil grover is also seen playing a coffee with D and asking question to Don and he is giving answers to know what happens in the interview at last and what are the questions asked by sunil Grover in the interview of coffee with D we have to wait and watch. As seen in trailer we can assume that the movie is full of hilarious comedy as expected by sunil which seems to be he takes them to the other level of funny conversation as expected, he takes fun part to the other level of best funny conversations as seen in tv shows which makes him like by the way he acts in other television comedy shows.

This trailer till now with 2 days of trailer release it got 1,825,320 views in youtube with likes of 14,733 and also by the dislikes which always happen with the count till now of 732 only.