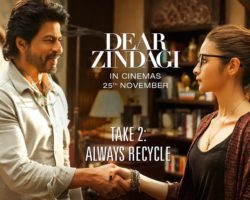 The first teaser of Dear Zindagi:Life is Game

As this Dear Zindagi take 2  Always Recycle teaser will give you a lot of positive vibes to start up your day for sure.
The second teaser in which srk making introduction himself with Alia as Jehangir Khan and Alia as Kaira

The Second teaser leaves us with a always recycle repairing people which is message how to change your life and love you zindagi … Dear Zindagi … in the background says it clear. Apart from the the cracking jokes of Alia are not yet better srk asks Alia you should crack better jokes please.