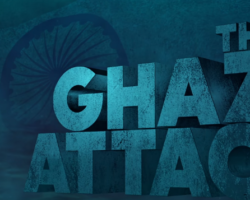 The Ghazi Attack: India First Submarine War Movie, Ghazi attack is an upcoming Indian movie starring Rana Daggubati as a lead role the Bahubhali villan, this movie is an Indian war film the submarine which is the India First Submarine War Movie named Ghazi Attack which is mysteriously sunk in 1971 war, there is also a film based on the same submarine a movie in 1988 Pakistan released a movie named Ghazi Shaheed.

This is India’s first Submarine based movie which is directed by debutant Sankalp and it will be partially based on his own book Bluefish.

Ghazi is a Submarine name which will be going in a war which is classified mission they wont get any medals or recognition.

The story of ghazi is about an executive naval officer of the Indian Submarine s21 and his team who remain under water for 18 days.

Amitabh Bachchan provided his voice for the Hindi version of the film the trailer was released on 11th of January 2017 and it is scheduled to release on 17th February 2017.

The Ghazi Attack is being all together finished in Hindi and Telugu and will be give the name in Tamil. It will be to some extent based on his particular own book Blue Fish. The Ghazi Attack is an heroic and epic underwater tale of the enormous bravery and undying patriotism of the men aboard the Indian Submarine S-21 who shattered the Pakistani submarine PNS Ghazi when it volunteered into Indian waters with the determination of terminating INS Vikrant and conquering the Visakhapatnam port on the eastern coast of India in 1971. PVP Cinema is producing the film. Karan Johar will deal out and distribution Ghazi Hindi version. The music is composed by K.Kay. Visual Effects handled by Eva Motion Studios.

Star cast of The Ghazi Attack and their roles: