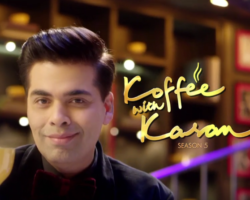 Koffee with karan regular segment of this talk show starts with the volley of question to the celebrity guests and later on he asks with the opinion of the guests and hear the others opinion and finally he finishes off with the rapid fire round which is famous segment or part of this koffee with karan talk show and handovers the gift hamper to the winner who answers well in the rapid fire round.

Koffee with karan Rapid fire round:

The winner of the Rapid fire round will be awarded with the Koffee with karan koffee hamper which includes chocolates, electronic gadgets and some precious items which are presented around the globe.

Koffee hamper is very famous and celebrities will love to fight for the hamper in this show, and as the question answered correctly he will chose the winner who answered straight and in a clever way.

Not the least few celebrities who involved in this talk show are also been in a few controversies as they fail to answer few very simple question.

koffee with karan season 5 started with the first guest as Shah rukh khan and Ali bhat this episode is aired on start world on November 5th 2016.