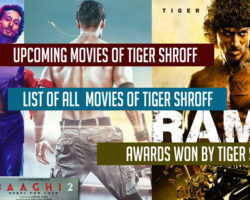 Tiger Shroff is well known in Bollywood industry for his flexible, marvelous and inspiring dance performance and his acting performance which is proven by his early movies. Tiger Shroff son of Jackie Shroff, the real name of Tiger shroff is Jai Hemanth Shroff and he is well known by the name of Tiger Shroff. His acting skills came from his birth and his genes has acting skills in own styles Tiger Shroff played several roles in bollywood as an actor as a lover boy as in his introductory movie Heropanti and made his debut in Bollywood.

Tiger Shroof has enough movies this year in 2017-2018 in his pocket and Upcoming Movies of Tiger Shroff will prove his more ability and his talent in his upcoming movies.

Tiger Shroof will be proving again with his tremendous dancing skills and acting and action skills and every one will be amazed to see Tiger Shroof playing different roles.

Let’s get in to details of Upcoming movies of Tiger Shroff:

Tiger Shroff as the main lead playing a role of Munna in his upcoming movie Munna Michael which is directed by Sabbir Khan and this is his third collaboration with Sabbir khan and Tiger Shroff. Munna Michael is a story of dance competitions which is dance action film along with Nidhhi Agerwal introduction (debut) movie. Nawazuddin Siddiqui will be sharing his dance experience and doing steps & making dance moves with tiger shroff in Munna Michael will be added additional excitement as Nawaz is a excellent actor now coming with his dance to shake with his act. Munna Michael which is a National dance competition on television and having 3 judges in to Judge the dance performance. In Munna Michael tiger shroff is a fan of famous dancer Michael Jackson which makes every one to expect few likewise steps from Tiger Shroff in Munna Michael.

Baaghi 2 is a Sequal of Baaghi movie. After the success of Baaghi movie starring Tiger Shroff and Shraddha Kapoor in main leads now comes Baaghi 2 which is a Martial arts movie which is directed by by Sabbir Khan and Baaghi made a huge box office collection of 130 cr approximately. Baaghi 2 in recent times released first look of Baaghi 2 and the look of Tiger shroof is impressive holding a big gun in his hand and Baaghi 2 is all set to give more action in this Baaghi 2 movie which is produced by Sajid Nadiadwala for his upcoming movies of Tiger Shroff.

Upcoming movies of Tiger Shroff : Student of the year 2

Sequel of 2012 movie Student of the year which his directed by Karan Johar and sources of Bollwyood says tiger shroff will be playing a lead role and Sara Ali khan daughter of Saif ali khan will be playing opposite to Tiger shroff in Student of the year 2. Sara Ali khan debut movie is confirmed with Sushant singh rajpoot which will be directed by Abhishek kapoor film kedarnath.

Most Entertaining Actor Male in 2014 by Big Star Entertainment Award

Super star of Tomorrow Male in 2014 by Star Dust Awards.

Star Debut of the year Male in 2015 by IIFa Awards.

Nominated for Best Male Debut in 2015 by Filmfare Awards.