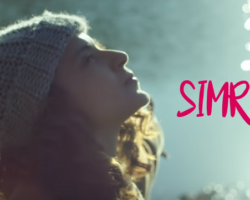 The New Upcoming Movie Kangana movie simran Teaser is just out and guess what the queen is back with new movie and new look and not even single dialogue from the trailer and yet the trailer is just awesome. Kangana steal the show with her performance in the teaser doing lot of kangana show in malls whether she is having fun, in a party she is having too much fun in her own way, she is eating at a food court all fun side in Kangana Ranaut Simran movie.

Makers of this movie just want to give how her role will be in her upcoming Simran movie and it will definitely brings you an idea what her role is and what character she lives in upcoming simran movie. Recently Makers of Simran Movie just released the teaser of first look of Kangana Ranaut upcoming movie Simran. She just steal the show with her acting only in the teaser. No Dialogues from the teaser not even a single bit and its only music and kangana in teaser which explains the role of Kangana Ranaut from the Simran Movie. After watching the trailer you will be amazed by the trailer of simran having only music and kanaga in teaser. Kanaga Ranaut the queen of bollywood is making lot of buzz these days whether it may be her upcoming movie Manikarniak or it may be a controversy. Now this time kangana Steals audience hearts just by her performance in SImran movie trailer. This movie also includes Esha tiwari in Simran Movie.

Previously Kangana Ranaut was seen in a Queen movie which is a solo lady movie who carries the whole film on her shoulders and make it a huge hit which makes kangana Ranaut to win national awards also for her role in Queen movie whether it may be a role of a Queen or it may be her role o Swag in prequel of her Tanu weds Manu playing a dual role. Now its time for her simran role to grab an award for this simran movie. Kangana just enjoys her roles in her movie she will just be in her character and live in her character which makes her to win awards. Now its time for queen to be simran in simran movie.

Simran movie just released teaser and movie is about to hit bollywood big screens in the month of September.

Kangana Ranaut In and as Role as Simran and Esha tiwari in an important role.