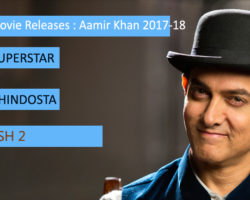 Before looking on Upcoming Movie Releases of Aamir Khan lets know a little bit about Aamir khan is a well know actor who is known for his best acting, like in every movie Aamir khan plays a role he gets involved in to the role and he gets deeper in the role he is playing and he acts.

Aamir khan was born on 14th march 1965 he is an actor as well as he is a producer, Aamir khan first appeared on screens as a child actor in a Nasir hussain’s film Yadon ke baarat and then he acted in a movie qayamat se qayamat tak playing a leading role in a tragic roamantic love story.

In 2001, Aamir Khan started a production company, the first realese of this production company was Lagaan, which is a huge hit, which is related to tax playing a cricket match with English people and winning and it is also nominated for the Academy award for the best Foreign Language film and he also earned a National award for best popular film.

Apart from the Aamir khan’s acting khan is also participated and spoken out of various social causes and he also created and hosted the television talk show Satyamev jayate through which he highlights the sensitive social issues in India.

Aamir khan releases one movie a year and this time in the year 2016, Aamir khan movie this Dangal is all over, Aamir khan played a role of Mahaveer singh phogat, a wrestler from Haryana, he looses hopes of having son, he trains his daughter’s Geeta and Babita which is played by Fatima and Sanya in the movie to make a wrestling history by having the historic win at the common wealth games and many achievements of winning title in all wrestling. Dangal is appreciated by all the audience loved by all.

Dangal Breaking the all time records of all indian cinemas and previous movie of Aamir 3 idiots and topping the all charts at the box-office, Dangal stood as the highest grossing film.

Aamir khan playing a role of musician in the film, who likely to be a mentor and playing a cameo or guest appearance in the movie.

Synopsis: A sequel to Sarfarosh movie which his releasd in 1999. Where Aamir plays a role of a crime branch officer.