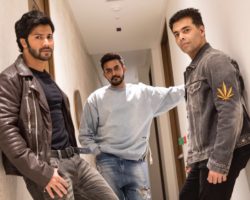 Varun Dhawan upcoming movie which will be released in 2020 under Karan Johar production house and directed by Shashank Khaitan with the makers of dulhania series will be making a war story this time with Varun Dhawan Rannbhoomi movie project is huge and story of war concept is a trend now.

Varun Dhawan Rannbhoomi movie story is based on an epic war sequence movie, action drama loaded with emotions and revenge in equal measures with the element of revenge at core and this is going to be something that Varun Dhawan has never seen before as warrior and now making everyone more anxious for Rannbhoomi release and Varun Dhawan transition is yet to be seen for this movie Rannbhoomi and presently he is busy in shooting for Sui Dhaaga movie playing a tailor role along side with Anushka Sharma with simple and innocent looks and for Rannbhoomi movie as it’s an epic war sequence movie his transformation for his role in Rannbhoomi will be more likely to be seen.

Rannbhoomi which is a warrior film which is filled with love and war sequences and also showcases, relationship, revenge, sacrifices, betrayal and all in Rannbhoomi movie.

Varun Dhawan as the main lead hero for Rannbhoomi and backing up with full of promotional stunts and epic and creative mega cinematic extravaganza.

Rannbhoomi film will be the first warrior movie for Varun Dhawan.

Varun Dhawan initially collaborated with Shashank Khaitan with movie Humpty Sharma first and then Badrinath ki dulhania and now for the third time with Rannbhoomi movie.

Varun Dhawan as the main lead for this movie and no cast has been announced by the makers of this movie.

Its scheduled to release on diwali 2020 world wide.