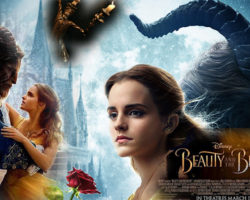 Beauty and the beast a Walt Disney Production is an upcoming Hollywood American romantic fantasy musical film which is directed by Bill condon and written by Stephen and Evan. This is the live action remake of Disney’s 1991 animated movie with the same name and its an adaption of a fairy tale.

Initially Makers of the Movie has released a promo with the first look at Beauty and the Beast where Emma Watson is seen entering the House of the Beast and saying Hello and picking up the Red Rose at last looks stunning in the first look shown perfectly as the Beauty.

Watch the First Look of Beauty and the Beast

This first look promo was released on May 23 2016, and it’s a live action retelling the Disneys classic which is coming in theatres on 3.17.17, and it was tweeted and released with the Hashtag #BeOurGuest. So everyone will be waiting for the date to come as everyone wants to be the guest of this Disney’s House.

Beauty and the beast is the fairy tale. Belle is a young woman. Here is the brand new trailer for Disney’s Beauty and Beast starring Emma wastson and Dan Steves. Emma Watson as Belle and Dan Steves as the Beast. Belle is taken to a prison by the beast in return of her’s father freedom. Belle agrees to be prison in exchange and being in prisoner of the beast. Despite of fear being the prisoner she make friends with the castle with the delighted staff and she learns and sees the beast beyond the look exterior to recognise the true heart and soul of the human prince with in the beast. In the meantime a hunter from the time named Gaston who likes belle and always wanted to take Belle for himself all time and later wants to take down the beast at any cost.

Beauty and the Beast Filming

Emma Watson as the main lead playing the role of Belle was confirmed and announced on January 26 2015, In May Disney released the first look of Beauty and the Beast featuring Belle as Emma Watson. The official teaser poster was released on July 7th 2016.

The Principal photography on the movie began at Shepperton Studio on may 8th. The Filming of the main actors concluded on August, after six days later it was confirmed that it has wrapped with the production.

Beauty and the Beast: Release

Film is scheduled to release on March 17th 2017, and music was composed by Alan Menken, produced by Walt Disney .