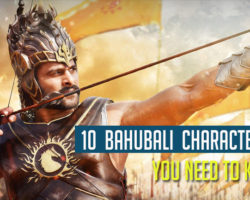 10 Bahubali character Names and Star Cast will be Remained in History:

Bahubali characters played in the India’s Biggest Block buster will be remained in history and all the actors and the team members will be happy to be working for bahubali. The work and the acting skills and the amount of dedication showed by each and every actor is tremendous. Below are the few characters role which will remain in history.

When it comes to the role played by Prabhas as Shivudu or Bahubali he always steals the heart of people by his great performance all times. Prabhas the Bahubali character the lead role played by prabhas will remain in history forever. Prabhas dedicated 5 years for this movie completing for Bahubali – The Beginning and Bahubali – The Conclusion. He is the solo star of Bahubali as he plays in and as role in this great epic and india’s biggest Blockbuster movie till now.

Prabhas dedicated his complete 5 years by not accepting any other films in between the shoot of Bahubali. Prabhas plays a role of Amarendra Bahubali the first declared Prince of Bahubhali for the kingdom of Mahismati.

Rana Daggubati plays a huge and very important role and a powerful villan and the king of Mahismati kingdom. Rana Daggubati plays this role very well and Balla Deva plays a tremendous role as villan. Ballala Deva played by Rana as a villan was appreciated very well and his character was pretty straight forward he could do anything for the throne of mahishmathi Kingdom. He is very powerful physically and so as Bahubali character. Prabhas is more powerful and in doing justice for the people in Mahishmati kingdom and taking the right decisions.

Raja Mata Character Played by Ramya Krishna was too powerful as the Raja mata and her character was shown very powerful as the Raja mata in Bahubali. She plays the role of Mother for Bahubali and Ballala Deva played by Prabhas and Rana Daguubati. She handles the part of mother in bahubali movue as well as taking care of Mahismati kingdom people in a easy way when it comes to war she plays a role of Raja Mata when it comes to selecting the prince of Mahishmati kingdom she choose the right paths and do justice for the two kings who are about to take the throne of king Mahishmati. Bahubali takes all attention when there are test to take the throne or any. Bahubali always steals the hearts of Mahismati people and stays in the heart of mahishmati people.

Kattappa by Satyaraj in Bahubali:

The loyal and trust worthy warrior and the salve warrior fo the king. Kattapa played by Satyaraj in bahubali will remain in history as he kills bahubali for the word which was given by his elders to be the salve of Mahishmati kingdom which leads to the death of Bahubali. He Kills bahubali for the word which is given by his elders a very loyal and slave of Mahismati kingdom. Kattappa will remain in history as why kattappa killed bahubali is all put his mark in the hearts of people already and in Bahubali 2 the conclusion it was shown how and why he killed bahubali.

Devasena by Anushka Sharma in Bahubali:

Devasena the princess of Kuntala Kingdom the warriror and the wife of Bahubali and mother of Shivudu. Devasena was seen torturing in the beginning part of Bahubali with chains. Later Shivudu rescues her from the kingdom of Mahishmati which leads to the story of Shivudu to begin.

Devasena the princes of Kuntala kingdom is very brave character and when her sword and archery is very much liked and seen in bahubali movie. Devasena falls in love with Bahubali and comes to Mahismati kingdom as wife of Bahubali.

Avantika by Tamannaah Bhatia in Bahubali:

Tamannaah plays a role of the Angelic Warrior and will be taking part of in rescuing the Devasena. Her sword fight and her beauty which makes Shivudu to fall in love with her. Tammannah Plays a huge role in Bahubali in the beginning part and in Bahubali 2 as the prince of Devasena resued by Shivudu she stays with Devanse and plays a part of protecting devasena in the end of the bahubali 2 the conclusion.

Bijjaladeva by Nasser in bahubali 2:

Bijjala deva the husband of Raja Mata sivagami as he is handicapped and the throne of Mahismati kindom was not given to him for that purpose and sivagami plays a role of Raja mata. Nasser playing a role of Father of Ballala Deva. He plays a main role in bahubali helping ballala deva to take the throne of Mahishmati kingdom.

Kalakeya by Prabhakar in Bahubali:

Kalakeya is the war lord who comes to occupy and take the kingdom of Mahismati by war with 1 lakh solders with him the powerful occupier of kingdoms. Kalakeya takes war with Mahimati kingom and in result bahubali and Balladeva fighting for Mahismati and rescuing Mahismati kingdom from Kalakeya. Kalakeya with this character wa new language was introduced in Bahubali which is appreciated by all audience and language convinced all others. Bahubali kills Kalakeya in war.

Aslam Khan by Sudeep in Bahubali:

Aslam khan the Persian noble who creates weapon and supplies to the kingom and his weapons are very special as he creates the weapons in a unique way. Aslam khan was seen presenting his favorite and best weapon for kattappa and kattappa rejects and sword of his is too light for the speed of sword kattappa performs during war.