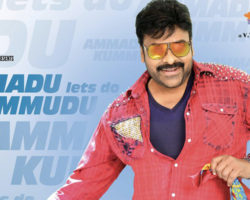 Mega Star Chiranjeevi is gearing up for his 150th movie titled Khaidi no 150 its going to be released in January and lined up for this Sankranti release.

Khaidi no 150 is the most awaited movie in the film industry as this movie khaidi No 150 is 150th movie of the Megastar Chirajeevi and also a come back movie after 9years.

With the release of khaidi No. 150 teaser in youtube it crossed over 3 Million Views In 28 Hours 25 mins! and it started breaking all present records as boss is back which is expected by the fans of Megastar Chiranjeevi.

The song titled Ammadu lets do Kummudu which has been released in youtube put away with the new records as well as it has crossed more than one million views in less than 24hrs.

Well if you have heard this song before then its time to listen this song again Ammadu Lets do Kummudu.

Music of this song is composed by Devi Sri Prasad aka DSP and he is well known for his good movies in tollywood once again gave a mass mix with song saying YO GUYS THIS IS NOT A MASS SONG THIS IS A BOSS SONG in a typical Devi Sri Prasad mass number.