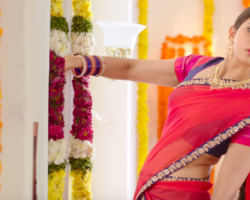 You cant get your looks off from the the leading lady of the movie Rakul Preet singh in this movie trailer of 2.00 min promo and she is unmissable. The two lead actors of this movie Naga chaitanya and Rakul just took away all with their cute expressions and their acting. Rakul preet singh expression will be noticeable by all audience in the trailer which makes high expectations for the movie as it is a complete entertainment. Jagapati Babu playin a role of Naga Chaitanya’s father in Rarandoi Veduka Chudham movie.

Chemistry between Rakul and Naga Chaitanya is very cute to watch on screens as in trailer it looks like they have teasing and Naga chaitanya looks like he is trying to get attention of Rakul preet in a family function. Rakul preet singh is looking at her best in Rarandoi Veduka Chudham.

Nagarjuna is very much involved in this Rarandoi Veduka Chudham on sets and makes sure to bring a complete family entertainer in front of audience.

Rarandoi Veduka Chudham as a complete family entertainer it also a lot of tollywood stars in the movie cast to play a crucial role.