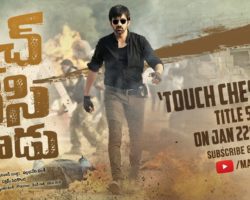 Next movie of Ravi teja touch chesi chudu title song lyrical video release by the makers and receiving massive response all over for this promo song. Ravi teja playing a lead role and he plays a role of a police officer in Touch chesi chudu movie. Full lyrical video Title song of touch chesi chdudu will be released on 22 January 2018 at 9am. Promo song made everyone more excited and ravi teja as a cop and his intense in his dialogues with powerful character and powerful title song makes everyone grabbed lot of attentions with his mass looks and expected to be the best title song ever for ravi teja movies.

Title promo also describes his character and gives a glimpse of his looks and role in title song in this movie Ravi teja Mass maharaj looks so massy in released promo of touch chesi chudu title song in promo ravi teja is seen making an outh as a police officer in his own voice with his powerful intense voice. Ravi teja is also seen in movie pictures in title song promo in different poses holding a gun and in several poses with his massy looks and promo is excellent.

Ravi teja playing the lea role as a powerful cop and also lead female leads of touch chesi chudu movie Raashi Khanna and Seerat kapoor, music by pritam and produced and directed by Vikram Sirikonda and story by Vakkantham vamshi.