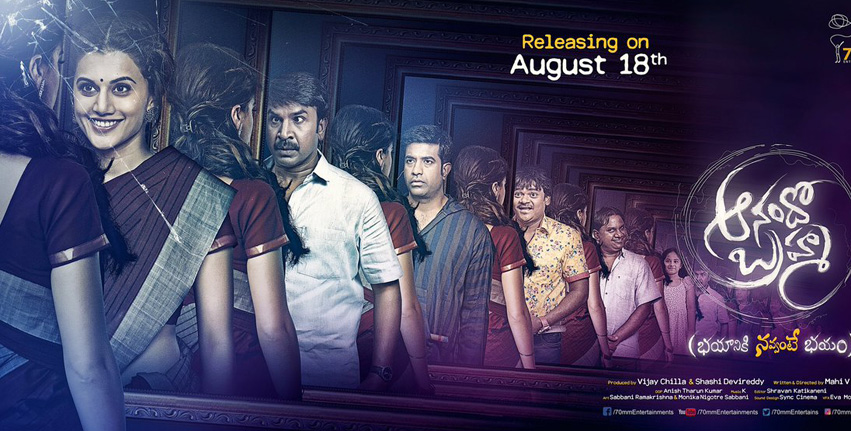 Taapsee pannu upcoming movie in Tollywood industry titled as Anando Brahma and makers of this movie released first look of Anando Brahma which will be released on August 18th and all set to release. Taapsee Pannu being busy doing bollywood movies and gaving massive hits in a series and receiving lot of appreciation for her tremendous acting performances in movies like Ghazi Attack, Naam Shabana, Running Shadi, Pink and she is back with horror movie smiling and scaring which his a part of the Anando Brahma movie and she is presently shooting for Judwaa 2 opposite to Varun Dhawan and Jacqueline Fernandez sharing the screen in Judwaa 2.

Anando Brahma story was heard by Taapsee Pannu befor pink and with her busy schedule doing bollywood movies she managed to do a telugu movie in her busy schedule and ready to mesmerize with her acting skills again and surprise audience with her role in her upcoming telugu movie Anando Brahma which is a horror comedy movie with star cast of popular comedians as her co-stars like Venna kishore, Tagubothu ramesh, Srinivas Reddy, Shakalaka Shankar also performing significant roles in Anando Brahma movie.

Gorgeous and Beautiful Taapsee pannu in Anando Brahma movie first look poster is seen in a maroon sari in front of mirror with a weird smile and scaring others.

After the first look and release date include in poster Taapsee is all set to scare with her smile in mirror as the first look of Anando Brahma movie which give a glimpse of the horror story which spin around the mirror as Taapsee smiles in front of mirror each and every actor seen in a surprise with a shock expression as they have seen something not to be seen.

Srinivas Reddy in the front of the mirror when Taapsee smiles seems like he was completely scared with his eyes turning other sides and the rest of the actors seen inside the mirror and inside mirror was also giving the same frighten and scary expressions in their own way which was impressive to see get scared as Taapsee smiles in first look.

Anando Brahma which is directed by Mahi V Raghu and produced by Vijay Chilla Shashi Devireddy under the 70mm Entertainments. Anando Brahma music is composed by Krishna Kumar.