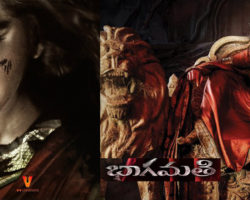 After the release of Anushka Shetty starrer bhaagamathie(aka)Bhagmati film its receiving lot of positive reviews which is released on January 25 2018 and its scoring big time AP and TG. Lady oriented film Anushka shetty performance is outstanding and shines in the horror and thrills everyone with her tremendous and scary avatar of Bhaagamathie which is directed by pilla zamindar fame G. Ashok yet again in bhaagamathie proved again same like Arundhathi movie and she is back with anushka shetty Bhaagamathie movie.

Bhaagamathie is a must watch movie sure watch it on big cinemas and Anushka once again proved she can slip in to any character with skilled ease performance and Background music of bhaagamathie movie is outstanding and superb by Thaman stood like a backbone with striking with horror.

Anushka shetty being a lady super star for a reason and this time with Bhaagamathie movie. Bhaagamathie film is the first telugu movie to shot completely in 4k High Definition format with good technical excellence in tollywood and Anushka’s all round and notch performance by anushka pulling off a sensational openings all over with stunning variation of Anushka character with totally different story and twists are highlight in this movie.

Bhaagamathie movie it’s another blockbuster horror film with brilliant twists and turn made everyone surprise and BGM score music is terrific scares you most in this movie. Bhaagamathie movie with a precise thriller mix of horror and natural elements with an interesting facts makes everyone thrills and anushka shetty known for her best lady oriented movies proved to be the lady superstar. It’s a one women show of Anushka she outshines in this movie and horror elements are taken out brilliantly in Bhaagamathie movie.

Bhaagamathie movie is well constructed pride, vanity gets better as the movie goes on with the story and everything isn’t what it seems in this movie with Anushka power packed sparkling performance amazes everyone with a upright first half with superb interval bang and its running like a fire with a bumper opening in india as well as overseas.