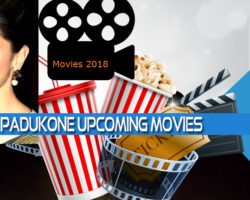 Deepika Padukon who began her acting career with her debut movie Om Shanti Om with Shah Rukh Khan under Farah Khan direction movie stole every one hearts with her gorgeous beauty and terrific and striking through performance in her debut movie received lot of positive reception for her acting and dance performance and deepika padukone won best debut actress for om shanti om movie. After that she never had to look back for role in bollywood cinemas and now deepika padukone is the top most bollywood actress in bollywood and here is the list of deepika padukone upcoming movies.

Like all other stars who became superstars like Aishwarya rai bachchan, preity zinta, Shahid Kapoor the same way deepika padukone before appearing in Bollywood movies she also made several commercial ads which lead to her success like close up ad.

Here is the complete list of Deepika Padukone Upcoming Movies in 2018:

In 2018 deepika padukone will be seen her first movie release Padmavat movie starring deepika and this movie stuck in many controversies and yet with the movie name movie is finally has a date and all set for release in January 25 2018. Earlier Padmavati movie was set for release in December due to controversies its releasing in Janaury 25th 2018.

Deepika padukone upcoming movies padmavati movie title has been changed to padmavat as rani padmavati in this movie will be reveling story of Rani Padmini and CBFC clearance gave U/A certificate with 26 cuts as this movie has been in very big controversies which are not expected and landed in huge controversy.

Deepika Padukone plays the role of Rani Padmini and Shahid Kapoor will be seen playing a role of Rana Rawal Ratan Singh and ranveer singh as Alauddin Khilji. After first look of Deepika Padukone, Rana Raawal Rana Singh and Aladuing Khilji expectation reached to the sky and every one was looking perfect for the role and direction of Sanjay leela bhansali making everyone more excited and curious as this a story of Rani Padmini expectations are too high.

Sapna Didi will be deepika padukones next upcoming movie this time teaming up again with Irfan khan this time sapna didi is a biopic a Mumbai mafia queen of the 80’s. It will be much interesting to see deepika padukone playing a mafia role for the first time.

Deepika padukone collaborating again with Sanjay leela Bhansali and signed another film with him and this time deepika to play Amrita pritam in snajay leela bhansali next and lead role will be played by Abhishek Bachchan.

Here is the compete list of Deepika Padukone upcoming movie release of 2018 and 2019, and list will be updated as soon the official statements will be released by the makers of her movies.