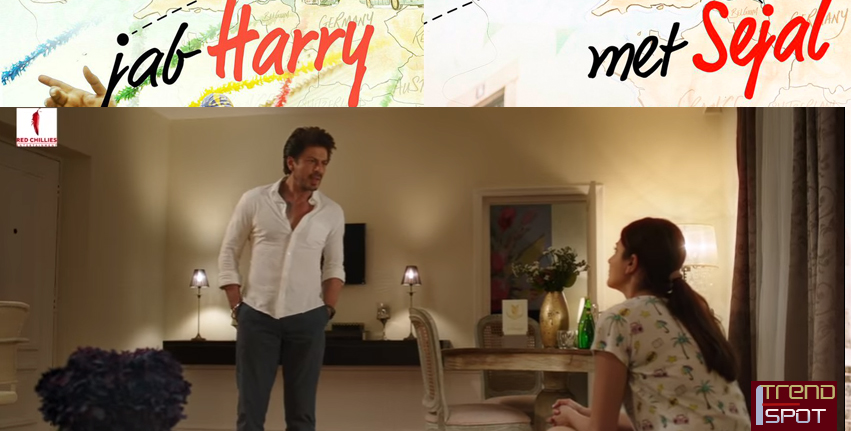 The story platforms Harinder(Harry) as the tourist guide says he is a cheap person. Meet Harinder Singh Nehra aka Harry played by Shah Rukh Khan in Jab Harry Met Sejal movie makers have released the first mini trailer and shah rukh khan seems to be scaring Anushka Sharma in first mini trailer by saying his character is bad and he is cheap and anushka says your are trying to scare me that’s why you are saying like that about your character.

The story of Jab Harry met sejal is all about the story spins around two characters Harry(Shah Rukh Khan) and Sejal played by Anushka Sharma journey to Europe. Its all about the search of sejal’s engagement ring which makes understand their journey makes Harry understand about the relationship and love healthier better and falls in love.

Sejal Experience more about the freedom security and solace and comfort which she finds in Harry’s presence.

Every one is eagerly waiting for this movie to hit big screens as their on screen couple is very good to watch. The first mini trailer of Jab Harry Met Sejal srk is seen making himself say about his character in a negative way to scare anushka Sharma. He even says he is cheap and he is back with love story again.

SRK is seen having a tattoo on his left shoulder the character of harry is yet to be known and from the first mini trailer of Jab harry met sejal gives you a glimpse about srk character in as he was seen boozing in several scenes and he is seen wearing casuals and a bag in his hand. Anushka Sharma playing a typical Guajarati girl.

Introduction of Mini trailers was a good idea by Imtiaz Ali come up with this idea and he says this is the good way to meet harry and sejal these mini trailers will serve different and exciting moments from the journey which progressively lead to the better and great love story which will open out in theaters.

Imtiaz ali has different way of writing hus stories and the journey of Harry and Sejal will leave you good moments and a great love story to see its not all about finding a ring its about how each of them love and learn from each other life and fall in love in their journey.