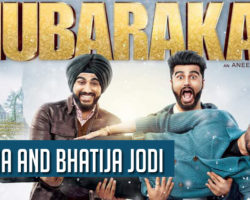 Mubarkan Movie is all on the subject of a Punjabi wedding which will be set in London.

This is the first time two kapoors are here in Mubarakan movie in a different kind of comedy this time this chaCaha bhatija Jodi i.e Anil Kapoor and Arjun Kapoor is playing a Dual role in this Mubarkan movie and its all set to gear up in Mubarakan which is a romantic comedy movie and everyone is excited now to see this ChaCha and Bhatija Jodi on big screens and having fun on screens and making audience go ROFL on Big screens.

Don't​ go by our innocent faces! The Chacha – Bhatija(s) are up to no good! Wait for #28thJuly to know the full story! @arjunk26 #Mubarakan pic.twitter.com/MLM5HxwRTp

First look of Mubaraka is out and the poster looks adorable just grab your attention of Anil kapoor and Arjun kapoor as Arjun kappor playing a twin role 2 Arjun kapoors will be holding his chacha in a lifting pose flat level horizantal pose in poster will straight away says that it’s a funny and comedy movie and Anil kapoor in the poster relaxing and laughing in his own way of his jhakaaz style.

Actor Anil kapoor took to twitter and tweeted showing the first look of Mubarkan and says don’t go by our innocent looks the Jodi of chacha and Bhatija is not good he tweeted, all we expect in this Mubarkan movie is lot of fun in Mubarkan and the mischievous things they do in Mubarkan and Anil kapoor also tweeted wait for 28th july to know th full story.

2 Arjun Kapoor and 2 Kapoor’s in Mubarkan:

Its like a surprise for Arjun kapoor fans with his double role and with the back to back movies his Half girflfreind movie just hit the theater’s and now its Mubarkan. Arjun kapoor in his upcoming movie which recently released the first look is very impressive and receiving a lot of response and its trending as in Mubarkan first look 2 Arjun Kapoor’s lifting Anil kapoor and Anil kapoor fosing in a jhakaaz pose in poster.

Arjun kapoor is seen in the first look of Mubarkan in a dual role one in a pagdi pose and the other Arjun kapoor seen in a stylish look. Arjun kapoor is looking excellent in both looks and anil kappor always stealing the show where ever he appear whether it is slumdog millionaire or it may be playing a role of a Don Welcome movie.

Mubarkan movie already received a lot of attention with the 2 kapoor in movie and 2 kappors Arjun kapoors Dual role and audience cant wait and can’t miss to catch the movie.

Mubarkan Movie Starring Anil kapoor as Kartar Singh and Arjun Kapoor in a dual role one is Karanveer Singh and Charanveer Singh, Ileana D’cruz the heroine of this movie as Sweety, Ahitya Shetty as Anjali.

Mubarkan just released the first look of Mubarkan and this Mubarkan movie of this ChaCha and Bhatija Jodi is all set to release on 28th of July.