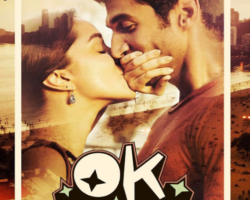 The Upcoming movie of Aditya roy kapoor and Shraddha kapoor is titled as Ok Jaanu. The Aashiqui 2 pair is all set to come together with the new movie.

Three years later this pair will be seen together after the Aashiqui 2 movie to create some magical moments on screen again with this romantic film. This movie Ok Jaanu marks the return of Aditya and Shraddha together on screen.

Aditya Roy Kapoor and Shraddha kapoor playing a lead role in this movie representing a young couple in a live-in relationship in Mumbai . Naseeruddin Shah and Leela Samson play supporting roles as an older couple in the film, showing the younger couple’s landlords. A. R. Rahman will compose the film’s score and soundtrack while Gulzar is the dialogue writer of this film.

The first look of Ok Jaanu poster says that “This new years Friendship figure out karlena – Ok jaanu”. As this movie deals with the live-in Relationship in this movie and what happens after that live-in Relationship. What are the goals of each individual in the movie will they be accomplished by them moving away from each other after some time.

Aditya Roy Kapoor and Shraddha kapoor both are looking cute and the chemistry of these couple is much appreaciated in the past and it looks great in this movie Ok Jaanu with their looks in the poster.

In this Movie Aditya Roy Kapoor and Shraddha Kapoor will be dancing for a famous song from a 1995 Bombay movie, this song is recreated by Baadshah. As the Bollywood Aashiqui 2 pair doing a Hamma Hamma song will be much seen more expectation from these young couple.

This film is scheduled to release on January 13th 2017 directed by Shaad Ali.