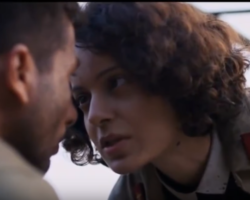 Rangoon movie is all about Julia character in this movie which is played by Kangana Ranwat. After the release of the trailer and songs kangana started stealing the hearts of all audience by her power packed performance in the teasers and songs. After her entrance and the introductory part which is very well and nicely shown in the movie shows that its all about julia in Rangoon with a Bloody hell. Rangoon is a love triangle movie with a war background movie.

After the duo of Vishal Bhardwaj movie kaminey and Haider and now its Rangoon time which is a love triangle.

It’s a Vishal Bhardwaj movie as Haider there is much to show in this movie and which was nicely directed by Vishal and its very appreciated with the direction and the scenes.

Kangana as Julia in Rangoon: Steals the Show with Power Packed Performance

Julia which is played by Kangana in this movie and she performed well with her power packed acting performance at her best, Julia is a star with a toxic relationship with her producer. For the Boost the morals of the queen army which is located in Burma, she was asked to perform and sent her with her troops which is against her will with a special Bodyguard Subedaar Nawab Malik which is played by Shahid Kaboor with her best swaggar in the role as in the movie, and then she falls in love with her Bodyguard (Nawaab Malik) and begins the love triangle and mud scenes and all. This movie brings the flavor and taste (aroma) of the 40’s with the music in its writing.

Kangana Ranawat’s Bloody Hell was the slogan and nation wants to know who she is dating and kangana character is so colorful and kangana is winning the hearts in her role Rangoon with the power packed performance. The equation between Julia and Nawab sing is hilarious and it’s a kind of innocent and one liners included with a witty its shot so beautiful with the location.

Music is too good and its definitely the high point in the movie and Gulzar creates magic again and this rime in Rangoon which is very colorful and it takes music to next level in the movie.

Kangana is the star of this movie and her innocent love to Rusi and Nawab is too Brilliant to watch. The wounded love will always have a plan but kangana steals the show with her love. Hum fankaar hai, jhooth ko sacchai se jeena pesha hai humara”.

Well it’s a vishal bharadwaj movie and this time its Ragoon its Julia, Bloody Hell, Kangana Ranawat, Shahid as Nawab and Saif as Rusi a Producer falls in love, Innocent love to Both, war draft movie, climax with a flaw.