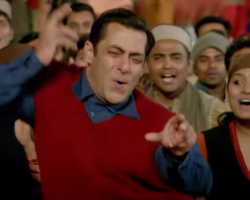 Salman Khan most awaited and most anticipated movie whcih will is scheduled to release on EID makers have released the first song from Tubelight movie which is titled as Radio song and its a sure top chart buster and its making records straight away after the song release. Radio song on youtube already crosses 11 million views when this article is written and its still going to break sooner all records with no surprises.

Tubelight Movie Radio Song, Salman Khan at his best with his Hook Step:

Radio song is a celebraion song with the tunes and beats celebrating joy and lyrics of tubelight moive radio song are very catchy with soft music which make you listen over and over with a hook stop from Salman khan making you remember.

Million’s are listening Tubelight movie radio song and here comes Sony Music to give audience a treat and surprises for audiences by releasing the loop song of Tubelight Movie Radio song and its a loop of Sun Radio oh oh oh …bajiao zara..

Firstly music steals your heart when you first time hear the songs music is composed too good with no hard and rough loud music it was kept very much soft to enjoy the song of tubelight radio movie song and Salman Khan appears as the background dancers in the radio song just lift him to applauds salman khan and has lot of goosebumps for salman khan fans to overjoy in radio song.

Salman khan best at his hook steps in his previous movies and now bringing a new hook step yet again and now in Tubelight movie radio song he not only makes everyone dance with him he also makes kids to dance and yes they already dancing salman khan hook step. Salman khan always steals hearts of kids as he did in Tubelight movie radio song and if its specially coming to kids and his hook steps he is always occupying the first place in stealing the hearts.

Radio bajaio zara looks like this story goes with the story and little bit of hint how he appears and will be clearly appeared in tubelight radio song, We also get to see the Presence of Late Ompuri sir is seen where salman khan hugging him which is seen in tubelight movie radio song which is very cute and it all goes in the flow of the song salman khan will be movie and saying radio bajaio zara in song going here and there in the song with his own hook step at one stop as the title track comes Radio bajaio zara.

Tubelight movie is scheduled to release on Eid. As everyone know its eid then its salman khan movie.